On a visit to West Chicago earlier this year, the two of us had a chance to tour the Illinois Medical District and surrounding neighborhoods and participate in a discussion about Opportunity Zones organized by Accelerator for America and Anna Valencia, Chicago’s dynamic City Clerk.

The Illinois Medical District, or “The IMD” as it is popularly known, is the second largest urban medical district in the United States. Formed in 1941 by state legislation, it consists of 560 acres of medical research facilities, labs, a biotechnology business incubator, four major hospitals, two medical universities and more than 40 health related facilities. The IMD has more than 29,000 employees, 50,000 daily visitors and generates $3.4 billion in economic opportunity.

The IMD sits at the confluence of three major trends.

First, the spatial geography of innovation, long associated with sterile research parks and corporate campuses located in closeted suburban communities, is shifting to innovation districts in the cores of cities. These new districts concentrate advanced research institutions, mature companies, start-ups and scale-ups, incubators and accelerators, investors, entrepreneurs and workers with skills at all levels, in vibrant urban places. They can form the foundation of a city’s global competitive advantage (think Pittsburgh’s niche in robotics or Philadelphia’s play around precision medicine) as well as spur much needed entrepreneurial dynamism.

Second, cities have become home to profound and visible income, wealth, and health disparities. The impacts are most deeply felt at the neighborhood scale. In South Lawndale, for example, more than 40 percent of men and nearly 50 percent of women report being in fair or poor general health, according to a 2017 study, compared to 12 percent nationally. North Lawndale, which we visited extensively during our tour, was the subject of Ta-Nehisi Coates pathbreaking The Case for Reparations in the June 2014 issue of The Atlantic.

Finally, the Tax Cuts and Jobs Act of 2017 provides a new incentive—centered around the deferral, reduction and (in some cases) elimination of capital gains taxes—to spur private investments in low-income areas designated by states as Opportunity Zones. The incentive differs from historic federal community redevelopment efforts in that it relies on equity investments rather than traditional debt and subsidy instruments and can be used for a wide variety of projects—residential, commercial, industrial, infrastructure—rather than being restricted to a relatively narrow purpose like low-income housing or historic preservation. 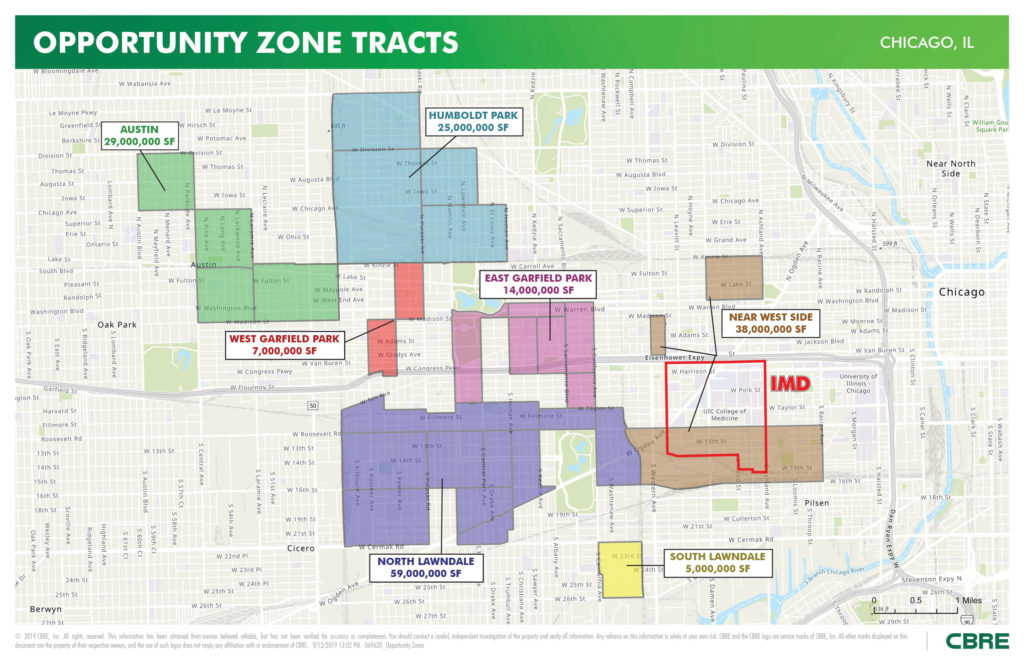 The IMD has the potential to pull all three trends together into an integrated, powerful package. The IMD is a naturally occurring innovation district and has recently become part of a multi-stakeholder effort to leverage its potential to drive the life sciences industry in the city, metropolis and state. The IMD is surrounded by some of the most distressed communities and most abject poverty in Chicago. And, as this map shows, a portion of the district, along with substantial parts of North Lawndale, have been designated as an Opportunity Zone.

Most significantly, The IMD has already undertaken a series of development and inclusion initiatives on which to build. In 2013, for example, The IMD concluded a strategic plan which committed the district to move away from a mono-focused medical district, defined almost exclusively by large hospitals, health care institutions and parking garages, to a mixed-use community with residential, retail, and amenity offerings. The demand for this transition is palpable, coming from the district employee and student base itself as well as the fact that the district is located less than 2 miles away from Chicago’s Central Business District.

On the inclusion front, The IMD and 6 major health systems—three within the District—have joined forces to form the Westside Anchor Committee, with initiatives focused on improving wellness in nearby communities. The IMD is also a key partner in the Chicagoland Healthcare Workforce Collaborative, which supports an inclusive workforce by focusing on targeted hiring practices, education and training and career retention.

The IMD is committed to three lines of work, alone and in conjunction with a broad array of public, private, civic, university, health, financial, community and other partners.

First, The IMD is developing an Opportunity Zone Investment Prospectus. The Investment Prospectus is a market tool designed by New Localism Advisors and Accelerator for America to enable cities to communicate the assets and advantages of their Opportunity Zones and identify projects that are investor ready and community enhancing. Cities like Birmingham, Erie, Kansas City and Stockton are already using the Prospectus to attract a diverse array of public, private and civic capital for projects that are truly transformative in concept, design and potential impact.

Second, The IMD is committed to being a responsible partner with Opportunity Zone investors. The IMD has a remarkable set of powers and resources, almost preternaturally designed for this tax incentive. It has, for example, total control over land use and zoning in the district and can expedite land entitlements and building permits. The IMD can also be a strategic co-investor, particularly through the smart disposition of land. As cities and investors are discovering, tax advantaged market equity is only one part of the “capital stack” in Opportunity Zone projects. Additional public contributions are often critical to enabling transactions that expand the supply of desperately needed affordable housing or the number and size of minority-owned businesses that serve local residents.

Finally, The IMD has broad ambitions for inclusive outcomes, building on the initial efforts with the Westside Anchor Committee and the Chicagoland Healthcare Workforce Collaborative. It is particularly important to use the procurement and hiring power of anchor institutions to expand economic activity and employment opportunities in the broader Westside community, building on innovative practices in Cleveland, Philadelphia and other cities. A recent paper on The Evolution of Innovation Districts—https://www.giid.org/the-evolution-of-innovation-districts/—teases out other efforts designed to advance inclusion.

Innovation districts are often perceived, wrongly in our view, as exacerbating economic divisions within cities. Yet they have the potential to drive inclusive outcomes by creating employment opportunities for disadvantaged residents, providing increased tax revenues for much needed services and bringing innovative practices and new players and resources to bear on challenges that have systemically bedeviled low-income communities. Opportunity Zones and the tax advantaged capital it marshals can provide added fuel to the inclusive potential of Innovation Districts.